Linda Stahnke has worked as a consultant for nonprofit organizations, writing grants and assisting with strategic planning. She also served as a Development Director for a faith-based nonprofit in Colorado Springs that served the needy.

She is the founder and former CEO of a public charter school that opened with 325 students and grew to nearly 800 students and two campuses in the four years of her time there. The school was known for its strong character education focus, unique special education programs, and parent involvement. It received several awards for excellence and a 96% parent-satisfaction rating.

Linda worked as an activist and legislative analyst for several educational groups. She reported to and motivated the public through a weekly appearance on a 3-hour live call-in talk show throughout the 90s, emphasizing awareness and involvement of voters in family issues. She cohosted and interviewed leaders, political candidates and policy makers. During this time the Colorado Springs Gazette named her one of four “Influential Women” in the city. Linda also served on a focus group for PBS’ Newshour with Jim Lehrer, providing conservative input for 10 years.

Linda and her husband George served on the Board of the Colorado Springs Home School Support Group for 9 years, assisting in its growth from 20 families to over 700 families in the Pikes Peak region during the late 1980s and early 1990s. After their last child graduated, Linda created and ran a homeschool program at a Charter School. 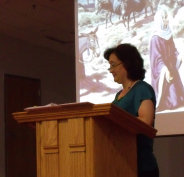 During her husband’s nearly 40 years of ministry, Linda has assisted in many ways. She taught Bible studies, mentored women, opened and operated a Bible college extension program, started and ran a food pantry, trained volunteers, and led worship. Linda says, “I think I am a gap-filler.’

George and Linda have been married for over 38 years. They have five children whom they homeschooled for sixteen years. They also have sixteen grandchildren. They love to camp and travel. They have done short-term mission work in China, Ukraine, India, and the Philippines. George is a chaplain in the counseling department at Focus on the Family and maintains a private counseling practice.